This topic for the tasting on Thursday, to stop anyone new having to wade through inches of my waffling (and at least one pointless poll).

Time will be limited on Wednesday, so will be posting some basic info on both wines up here tomorrow evening. Hoping to be able to kick off at 8pm, so get polishing those decanters.

Thanks once again for organising this. The bottles are good to go, I just need to make some lamb kofte on the day to soak up the alcohol !

In case anyone is interested (and have the time) there are a couple of related podcasts you might want to listen to:

The excellent I’ll Drink to That! podcast, interview with Christian Moueix here:

Episode 422: Friday, June 2, 2017 Christian Moueix is the president of Etablissements Jean-Pierre Moueix, based on the Right Bank of Bordeaux, France. He oversees several properties in Pomerol and Saint-Emilion, including Chateau La Fleur-Petrus,...

And the UK Wine Show podcast, an interview with Murray Barlow of Rustenberg, split into 3 episodes:

I’ve got no idea which to try first (totally open to suggestions), but here’s everything I got on the Bordeaux wine.

Château de la Commanderie, situated next to the church, was one of the ‘commanderies’ set up by the Knights of St John of Jerusalem to protect the pilgrims on their travels to Santiago de Compostela in north-west Spain.

Owned by the Lafon family, the 26 hectare vineyard is planted with 75% merlot, 20% cabernet franc and 5% cabernet sauvignon, with vines averaging 25 years of age. Harvesting is by machine and three weeks’ vatting is followed by ageing in barrel and vat. It is a property we have followed over many vintages, typically with an aroma of sloes and a sweetly fruity palate.

Until recently it was the only Lalande-de-Pomerol in the JP Moueix portfolio, a fact which recommends the property highly, and under their guidance this 26 hectare estate has been getting better and better.

2015 vintage - A particularly fragrant, ripe merlot nose gives way to a medium-weight, supple fruit texture. The wine displays soft tannins and the hallmark stone-fruit character that is so typical of the wines from this property. Lovely, easy-drinking fruity claret.

@MikeFranklin was helpful and found this:

"The Château de la Commanderie located on the town of Lalande de Pomerol, on the old road to Compostela, is the property of the GFA Château de la Commanderie belonging to the heirs Lafon.On a single block of 39 hectares, 69 acres, 90 centiares, including 29 hectares, 6 ares, 36 centiares planted in vineyards.The care provided to the vineyard, the size that sacrifices the quality of the concept of yield, would not be sufficient, if before being picked, the grape does not was brought to full maturity, giving a quality wine appreciated in many foreign countries. "

Might be a starting point. From google translate of this page: https://www.lalande-pomerol.com/chateau/chateau-de-la-commanderie

A breeding mastered by the experts of Pomerol

The Chateau de la Commanderie belongs to the Lafon family. In addition, the establishments Jean-Pierre Moueix carry out the breeding of this wine. The name of Jean-Pierre Moueix is ​​known and recognized in the Bordelais and within the connoisseurs of wine since he has been and now his heirs are among others owners of Chateaux Trotanoy, Lagrange to Pomerol, and the flower Petrus. It is also Jean Pierre Moueix who was the initiator of the international reputation of the famous Petrus. The association between the Lafon family and the mastery of Moueix for the Pomerol and Saint Emilion brings to the Chateau de la Commanderie a delicate and very pleasant wine.

And I found a postcard! Bugger all else available online, but I did find this charming picture from a postcard on Wikipedia. Taken some time between 1900 and 1920 apparently. 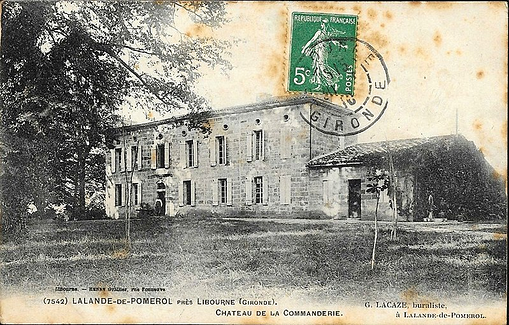 One small piece on Lalande-de-Pomerol:

One of the grand old estates in the Cape and one of its most beautiful, Rustenberg is still family owned and one of the leading producers in the prime Simonsberg-Stellenbosch ward.

The Barlow family have been at Rustenberg, which lies just outside the university town of Stellenbosch itself, since the 1940s, reuniting two old estates (Schoongezicht and Rustenberg) which had been divided in 1810. The ebullient Simon Barlow is the current owner and head of the family, and his son Murray took over as cellarmaster in 2011.

A wide range of wines is produced, roughly half white and half red, from its c.110 hectares of vineyard which take up just a small proportion of this spectacular 880ha property, regularly booked as a film set and also home to a herd of free-range cattle.

The estate was first established in 1682, wine first bottled in 1892, but it is now right up to date with BWI and IPW accreditation. The original house dates back to the 1700s and features on the now-iconic Estate wine label, the design of which has remained unchanged since 1955. Or perhaps virtually unchanged, as sometimes the house is shown with its front door open, and sometimes with its front door closed, prompted by a major event in the life of the family.

On such a large property it is no surprise that myriad grape varieties are planted. There is a fantastic range of aspects, soils and elevations for the viticulturists to work with, providing Murray and his team with a wide and complex range of building blocks with which to put together their blends, and in particular the flagship Estate wines. The well-known ‘Bordeaux’ blend John X Merriman is made from 18-20 different parcels. A number of single-vineyard wines are made, notably Five Soldiers Chardonnay which is named after five pine trees which stand proud, with a fabulous view out towards False Bay, and Buzzard Kloof Syrah which is named after the Russian Steppe Buzzards which pass through during summer.

The whole property is a National Heritage site. Its high-tech winery is hidden in beautiful historic buildings, the land farmed sustainably, its workforce managed with respect. Murray Barlow is to marry on the property later this year and all bodes well for this unique family-owned estate in the hands of future generations.

2015 vintage
A half bottle of one of the Cape’s most loved Bordeaux-style blends in a top vintage. This is deeply coloured, classically styled but rich and ripe too, with deliciously smooth tannins and a long finish to the flavour.

Rustenberg has a wine-growing history dating back to 1682, when Roelof Pasman from Meurs, near the Rhine, recognised its wine-growing potential. By 1781 some 3000 cases of wine were produced on the farm. Production doubled by the end of the century and a new cellar was built. Wine has been bottled at this cellar for an unbroken period since 1892.

In the early 1800s Rustenberg was divided by owner Jacob Eksteen and a section was given to his son-in-law, who named it Schoongezicht and sold it soon after. Rustenberg and Schoongezicht were at their peak around 1812, with beautiful homesteads and flourishing vineyards. But by mid-century, recession coupled with disease in the vines, brought bankruptcy and dispossession.

Schoongezicht was rescued in 1892 by John X Merriman (who was to become Prime Minister of the Cape), and Rustenberg by his brother-in-law Sir Jacob Barry. Together they revitalised the farms. Fruit was sent to Covent Garden; new vines were grafted onto disease-resistant American rootstock; wines were exported to England and the Continent – and even found in Siberia.

The Rustenberg Estate stands on an impressive 880 hectares against the iconic Simonsberg Mountain in Stellenbosch. When standing in the high vineyards of the Estate, the entire vista of Stellenbosch is revealed, with a glimpse of Table Mountain in the distance. Rustenberg was awarded National Heritage Site status in December 2004.

Of the 880 hectares making up the Estate, 110 hectares are under vine (with plans to plant some more vines in the next year or so), 200 hectares make up the beautiful pastures and farmland for our cattle to graze on, a portion hosts the historical farm and winery buildings and other structures, and the rest of Rustenberg is comprised of conservation land, made up of natural “fynbos” (the indigenous flora of the Cape) and a myriad of wildlife (including porcupines, caracals, and cape leopard).

The Estate is also proud to be a film-friendly property, hosting a number of local and international film crews shooting everything from adverts to feature length films.

Vineyards producing the grapes for Rustenberg’s wines climb the rich red slopes of the SimSimonsberg. A range of slopes and aspects allows site-specific plantings that enhance varietal characteristics.

The dedicated vineyard team have been working hard to rejuvenate our vineyards by planting virus-free vines imported from France. A small-scale nursery has been started for propagation, providing available rootstock for upgrading, replanting and experimentation. Controlled irrigation is used when necessary to alleviate stressed vines and maximise the quality of our grapes. All grapes are hand-harvested in the early mornings and all vineyard blocks vinified separately, then blended for added complexity. There is no set formula – the blend depends on the vintage. Even sections within a vineyard are monitored according to the acid/pH levels, natural sugar levels and flavour of the grapes, which are often picked over a two-week period to optimise ripeness and quality

The Estate’s three flagships are the Stellenbosch John X Merriman Bordeaux blend, the single-site sourced Buzzard Kloof Syrah, and the barrel fermented and matured Stellenbosch Chardonnay. They are an expression of the Estate and Stellenbosch’s finest vineyards blending various vineyard sites to create wines that are greater than the sum of their parts. All three of the wines benefit from careful bottle aging.

This wine is named in honour of a former owner of Rustenberg, John Xavier Merriman, who bought the farm in 1892 in sympathy with farmers suffering from the phylloxera crisis. He played a great role in revitalizing Rustenberg and in promoting the tourism and agricultural value of Ida’s Valley, the area close to the town of Stellenbosch in which Rustenberg is situated.

The wine itself is a Bordeaux-style blend, with all of the fruit coming from the Estate, and made predominantly from Cabernet Sauvignon and Merlot, the greater of which depends on which varietal has a better showing over the other in any vintage. The John X Merriman is therefore a wonderful representation of the Estate, as well as the characteristics of a vintage.

Loads of technical detail on the winery factsheet here: 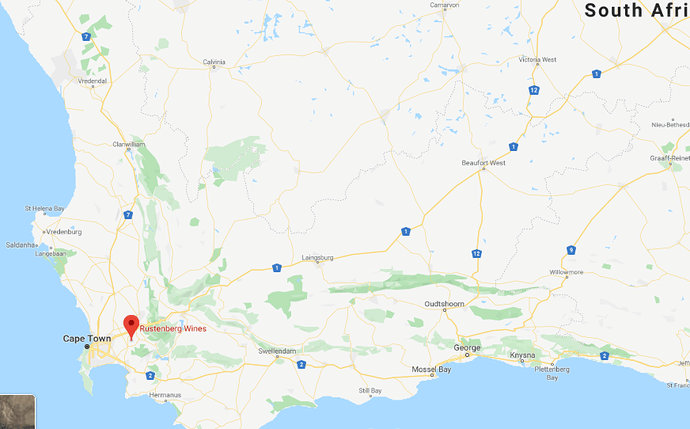 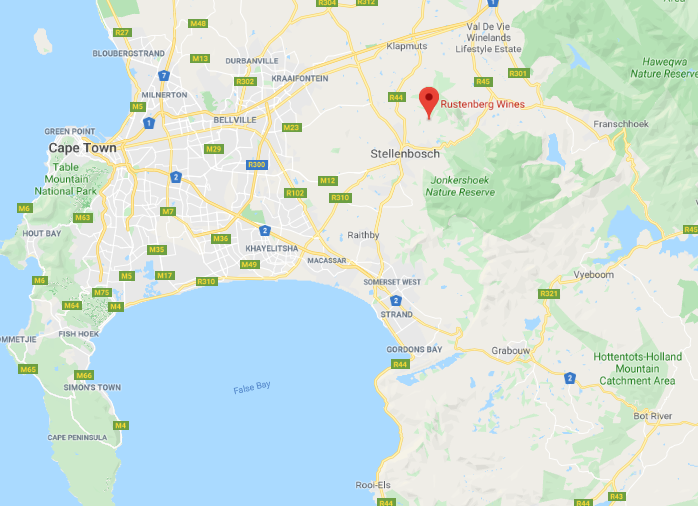 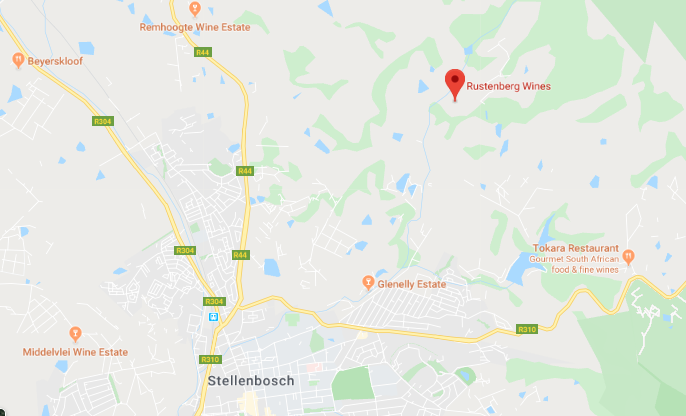 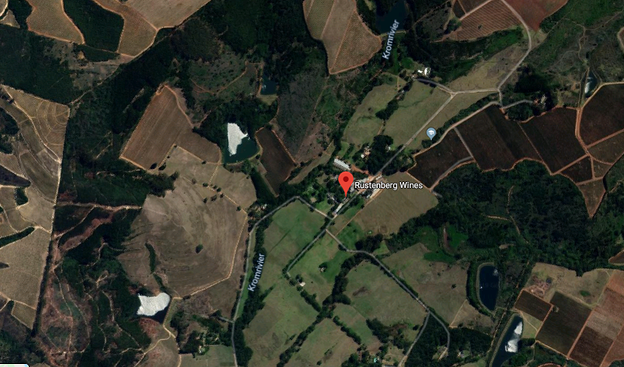 A beautiful spot tucked into the Simonsberg nature reserve.

See you all Thursday

Thanks so much for putting this information all together @Brocklehurstj
This will keep us occupied until Thursday.

Just for awareness, I’ve just finished the last of the UK Wine Show trio and the John X Merriman is not mentioned at all during any of the Rustenberg podcasts.

Answers on a postcard please

Damn I meant to open the bottles in the morning, but forgot… I don’t think you need to decant at all, but will benefit from opening well(?) in advance

I opened mine about an hour ago but I’m not decanting, just letting them stand open. I might pour two glasses around 7.

I’m particularly looking forward to the Commanderie. I’ve had two bottles before that left me unexcited but both were from less good vintages '11 and '13 (still got one of them). So I’m very much looking forward to trying a better (if young) vintage.

Ours are open and waiting. Just tried the sherry from next week’s main TWS Taste, because we are away next week. Very nice.

I think I’m going to have to bow out guys, 4 year old is quite poorly and is attached to me like glue

Oh no, how can we survive without your gifs!

I’m sitting poised, dinner is in the oven, glasses poured, getting some air. Life is good in my hippy van! 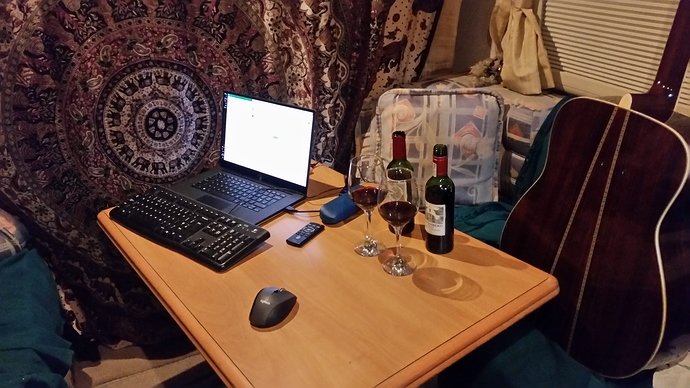 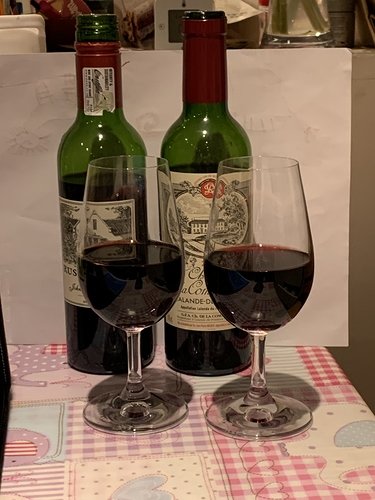 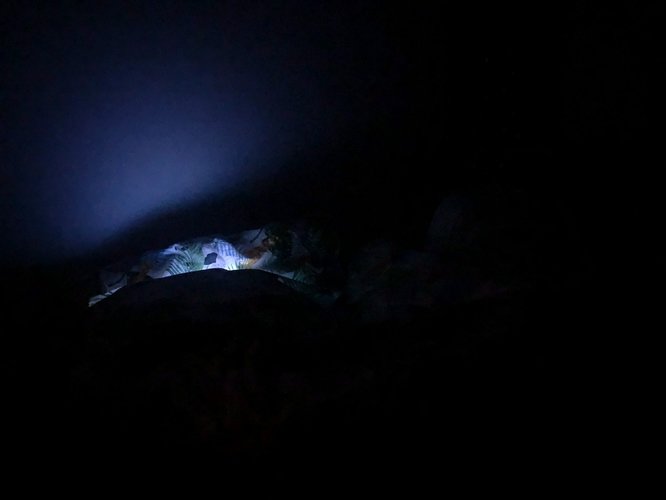 This is my view - trying to settle my four year old. He is currently resisting.

Hope yours gets well soon @Leah , sorry you can’t join us

Speaking of who is joining us…

Yeah I thought they looked a little on the full side. Have to be careful with the old swirling!

Pour them back into the bottles?